Once in Western Sahara I met a mother who had been sold out by the United Nations.

“No one will give us our freedom- we must take it,” Ms Embarka Elmehdi Said told me. Her voice was soft yet steady. But, her eyes were hard.

We were drinking tea in the RASDTV (the national broadcaster) media centre. In a shadowy, dusty room out of the desert sun, we kneeled on what may have once been a Persian rug- just a twisted fibrous membrane strung out over the dirt floor. She was tossing tea between shot sized glasses, then tipping the dark amber liquid into a tiny teapot. A flamboyant way to dissolve immense amounts of sugar (a dentist’s nightmare) into tea, the elaborate ritual also served to show off the host’s dexterity. From the corner of my eye, watching the tea bounce from glass to glass was a pleasant distraction from our conversation.

I had just asked one of Western Sahara’s most beloved reporters if she would be happy to see her children live as she does- as refugees. Exiled from her homeland as a child, Ms Said lives in a makeshift refugee camp deep in the Sahara. She described years of hardship- violence, ambition, loss, death and the omnipresent, searing heat. Poverty was everywhere in the camps, but worse still was the boredom. Most children and adults alike have so little to do. Some spent entire days making tea. Others got involved in smuggling. Most just hung around the camps, waiting forever.

“If [the political impasse] continues, we will take our independence. Not be given, take!”

As she said this, she snatched a coffee mug and cradling it close. She scrunched up her face, and gave me a look as though indicating that by taking the mug, she had somehow reclaimed some of her homeland.

“…no one will give us our freedom- we must take it!”

After that conversation, I thought about the conflict differently. The way she looked at me; so angry and desperate, cut past my intellectual understanding of the situation. I understood why so many Sahrawi float the idea of a suicidal offensive against Morocco. A hopeless war makes a lot of sense when your children are refugees. 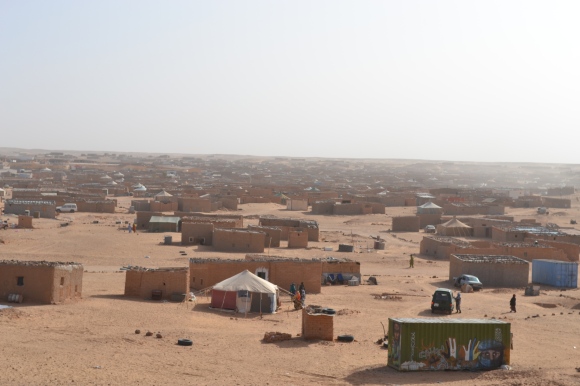