Some of my fondest travel memories involve cheap street-side eats of questionable hygiene. Though I’ve had my fare share of streetfood, there’s always so much more to try. Hence, this is far from a comprehensive list of the best food out there. Rather, it’s a shortlist of my personal favourites.

Even if it’s supposed to be a delicacy in Beijing, I couldn’t help but feel conscious of just how touristified the snack is. Nonetheless, eating a scorpion is a satisfying experience. Wangfujing Snack Street is the most well known place to procure a mouthful of fried arthropod. Crunchy on the outside, squishy inside, they actually taste pretty average. But, how could eating a scorpion not be a memorable experience?

At 6am on a steel grey Marrakechi morning, everyone had their pointed hoods pulled over their faces to keep the rain off. Steam from our bowls drifted in the wind; the smell of cinnamon and ginger mixing with the reek of mud and exhaust fumes. Nothing quite warms the stomach like a serve this spiced chickpea and lentil soup. An icon of the Maghreb, harira is best in winter, but makes for a decent cheap eat even if you aren’t ankle deep in muddy water.

In Chile, hotdogs are serious business. Take an ordinary hotdog, add avocado, tomato, sauerkraut, chilli and a horrific amount of mayonnaise and you have a completo. Don’t approach a completo as you would a normal hotdog- it isn’t a snack, it’s a full meal in its own right.

Eaten the world over, my favourite locust are cooked Japanese style. In Japan, they are usually boiled in soy sauce and sugar, though sake is sometimes added for an extra kick. They make for a crunchy, salty snack that’s packed full of flavour. Although they sometimes pop up on the street, apparently they are actually easier to find in department stores. 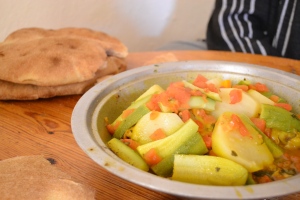 Tagines are everywhere in Morocco, even on the street! Although nothing beats a full tagine feast with comrades, streetside claypots also make for a decent meal on the run. Vendors often have tiny single serve tagines lined up on roadsides, bubbling away. Ingredients differ from region to region. The idea is to let the contents simmer away until everything is pretty much goo. Then, mop it all up with some crusty bread.

Variations on the humble empanada can be found from South America to Europe and Asia. It’s a simple concept, something gets wrapped in dough and fried or baked. My favourite variations hail from Colombia and Venezuela, where cornflour is used as the exterior, and an array of sauces are always on offer. Common fillings include chicken, beef, beans, lentils or salty cheese. Accompanied by some fresh fruit juice and dosed in plenty of picante sauce, you have the perfect snack.

When the altitude starts to get to you, some butter tea really clears the head. A mug of this salty, buttery broth is the meal of choice when you’re in need of a break from hiking up mountains. I say meal because a few mouthfuls of butter tea will leave a brick in your stomach for the rest of the day.

A similar beverage which I personally (slightly) prefer can be found in Mongolia. Suutei tsai tastes almost the same, but is made with sheep or horse milk instead of yak butter. Mongolian etiquette is pretty clear cut; stop by a yurt (moveable tent used by nomads) and you can expect to be given a steaming mug of tea before being sent on your way, or offered a patch of floor for the night.

Legend has it that Genghis Khan’s favourite refresher was a swig of pungent horse milk. It’s sour, and hits you like a shot of vodka. People sometimes sell mare milk from bags on Mongolian roadsides, and I have to agree with Genghis, it makes a great refreshment after a long day of riding.