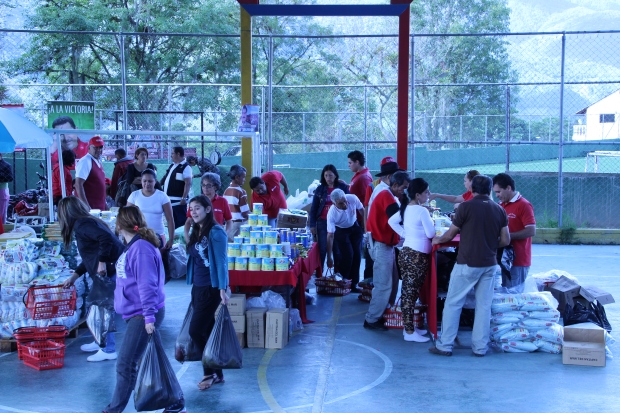 After waiting in line for an hour, I was asked if I was on “the list”.

“What!? What…list?” I asked, suddenly wracked with nerves. “The list”, she repeated, pointing at her clipboard. I’d been waiting patiently in line for over an hour, eager for my first Mercal experience.

For those of you who don’t know, Mission Mercal is a social programme that distributes heavily subsidised food, mostly in poor neighbourhoods. Along with well over 16,000 fixed stores, Mercal also operates roaming stalls that sell basic foodstuffs at well below market price.

Last week, one such stall took place in my neighbourhood, and I decided to check it out. Somewhere between getting in line at the crack of dawn, and having the afore mentioned conversation, my caffeine starved brain missed the memo that I was supposed to put my name down on a list, which determined in what order people got to line up. Belatedly, I did so when it became apparent that I wasn’t getting any discount munchies without it.

“Rrraighnd,” the Mercal worker stated, rolling the “R” like mad. “No, Ryan,” I responded again. A brief silence ensued, and we both pondered just how much white people can mess up processes that in reality, are really, really simple- like putting a name on a piece of paper.

“Erm….Raughn?” She asked again, twisting my name into something that sounded like the noise my cat used to make when he had a hairball. “Sure, yeah, Raughn works,” I figured. “Ok, and your surname?” She asked, breathing a sigh of relief.

When I gave her my dozen syllable surname, her eyes glazed over. “….gringo?” She suggested timidly. And so, I submitted to “Raughn de Gringo”.

A new line was formed, and I ended up back where I was when I first started rubbing the sleep from my eyes. I looked through the fence of the local basketball court, which had been converted to a marketplace. I watched my neighbours shovelling masses of cheap food into boxes, before dragging said boxes up the steep road, laughing all the way. The main street going up into my hillside barrio looked like one of those weird trails ants make between a food source and their nest. Everyone was buying their weight in pasta, rice and cornflour, then slowly but surely wobbling their way back home, buckling under the weight of a month’s supply of food. Meanwhile, the line I was in got thinner, and looser, and soon we were all out of order again. Then, I heard my new name.

“Raughn! Raughn de Gringo?” Like a mic-check, the rest of the crowd responded, erupting into what I can only describe as a chorus of weird cat noises. “Raugh? Raaaawn! Hey, Riiiaaawwwwwmn? Rawn, Rawm Reeeooown!” It became obvious that my whole neighbourhood, and the Mercal staff, where having a great time trying to pronounce my name. Before anyone coughed up a furball, I started waving my arms. “I’m Raaaughn! Raaaughn de Gringo, right here!” I shouted.

A few minutes later Mercal staff were loading my outstretched arms with heaps of food. Along with spaghetti, cooking oil, flour, coffee and other basics, somehow I found myself dragging around packets of I-have-no-idea-what. All sorts of weird Venezuelan….things. When I got to the makeshift checkout, just to top it off a whole, raw chicken was lumped on the peak of my mountain of food, which totalled to well under US$10. Now, in my room I have a huge crate stuffed full of food, that I suspect will take months to slowly eat. And half my neighbours are still calling me “Raughn”.