No, there are no guinea pigs at Cuicocha, at least not that I could see. The name comes from the islands in the middle of this picturesque crater lake that look a bit like a pair of guinea pigs (Cuicocha is Kichwa for “guinea pig lake”) .

The most wildlife you’re likely see here are scores of chunky lizards basking on the trail. Walk slowly and you should see plenty when the sun is out. 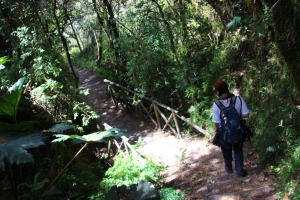 The lake can be circumnavigated in about five hours, but don’t expect things to be too easy. The trail mostly follows the ridge of the gaping crater nestling Cuicocha. It’s moderately steep at times, and the weather here changes quickly. Rain showers can come out of nowhere, and the wind can be intense while straddling some of the more exposed ridges. Stay clear of the edge of the cliffs facing the lake. The soil is loose, and it’s a long way down to the waterline.

Cuicocha can be reached from Otavalo or the village of Cotacachi. From the latter, a cab should cost around $5 each way. If you want to make the hike a bit easier, ask the driver to drop you at the top. However, before you hit the trail, grab the driver’s phone number and give them a call when you’re almost finished. As far as I’m aware, there’s no public transport out here.

The relatively high cost of reaching Cuicocha may be off-putting for some, but I’d suggest not giving this place a miss. It’s a good, varied walk, and the views of the surrounding countryside are stunning.