“The hardest thing is the fear,” said the volador. “Once you deal with that, it’s really not too difficult.” We were sitting in the zocalo of Cuetzalan, a small village in the far north of Mexico’s Puebla state. The village is one of the best places in the state to see the voladores (people who fly) in action. Of course, contrary to what the name suggests, voladores don’t quite fly. As Buzz Lightyear would say, it’s more like falling in style.

The danza de los voladores (dance of those who fly) starts with a troupe of voladores approaching a tall wooden pole. In the case of Cuetzalan, the pole was one enormous tree trunk, placed right in the middle of the zovalo.

Dressed in their colourful garb, the voladores circled the pole, playing musical instruments. 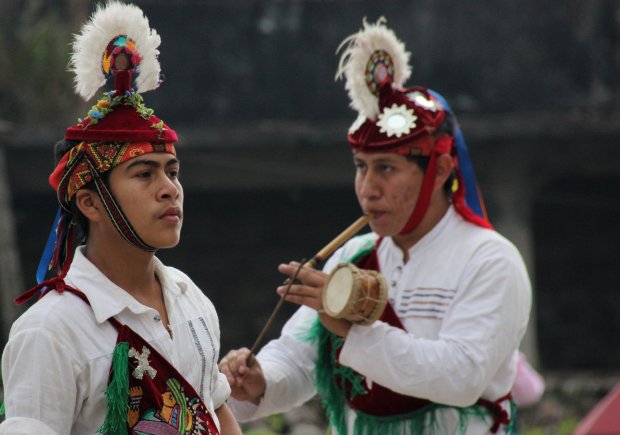 As the old saying goes, what comes up, must come down. This is where the dance really begun. The voladores dropped from the top of the pole, attached to the top with ropes (a bit like a bungee jump).

Unlike bungee jumpers, the voladores then spun in the air around the pole. One continued playing his instrument, even while spinning upside down.

The Cultural Significance of the Voladores

The danza de los voladores isn’t just an interesting show. It’s been recognised as being of intangible cultural heritage by UNESCO, and is one of the strongest traditions of the indigenous Totonac peoples.

To the Totonac, the danza has a complex set of meanings, including representing fertility and harmony between the natural world and the gods.

More than anything else though, the performance is primarily a source of local pride, and an expression of the resilience of Totonac culture.
In Cuetzalan, voladores learn their art from a young age, and it’s easy to see kids around town honing their skills, and impressing anyone who passes by.

The danza de los voladores is perhaps the best reason to visit Cuetzalan. Every Sunday, the voladores put on a show, though the events become daily affairs during peak tourist season. Expect to be hit up for a tip afterwards. Between shows, there’s plenty more to do around Cuetzalan. The ruins of Yohualichan are located just 20 minutes out of town. They don’t hold a candle to the likes of Teotihuacan, but are nonetheless an impressive collection of pyramids.

There’s also a handful of waterfalls and caves around the area. Most of these sites can be easily reached by public transport from town for a few pesos. The tourist office near the zocalo can provide up to date details. The town is also famous for its coffee, which generally has a mild taste. A good place to sample the local stuff is Los Cafetales Cuetzalan, a popular cafe on the zocalo. It’s also possible to stock up on beans, which typically cost around MX120 per kilo US$5.40).

Another interesting local treat are vanilla cigars. Until the 19th Century, the Totonac were big vanilla farmers. Today, the local vanilla industry is relatively smaller, though the vanilla cigars remain quite popular. They can be found in the market around the zocalo. A pack of five sells for MX20 (US$0.90).

How to Get There

Cuetzalan can be reached from Puebla city, where there are regular buses from early morning to around 6pm from the CAPU terminal. The trip takes between 3.5 to 4.5 hours, depending on whether you hit traffic on Puebla’s choked outskirts. There’s plenty of hostels, with prices hovering between MX300-600 (US$14-28) a night for a private room. Be sure to haggle, and you should be able to shave a little off the price.

As a Pueblo Magico, Cuetzalan merits an entry in my ongoing series, Shit Hot or Shit Hole: Exploring Mexico’s Pueblo’s Magicos. Cuetzalan has managed to stay on the list since 2002, which is a bit of an achievement in itself. However, it’s not hard to see why. This little village is extremely proud of its cultural heritage, and it shows. The cobble stone streets and crumbling colonial architecture also add to Cuetzalan’s pleasant feel. So, how does Cuetzalan fare?

Great array of attractions outside town

Can get a little clogged during peak season