When you think of magnificent British castles, you probably think of Dover, Warwick or Edinburgh. Maybe you prefer the glorious Stirling Castle with its steep climb, possibly even the ever-imposing Arundel, or perhaps you’re more partial to the Ex-Hacienda de Chautla – wait, what’s that last one?

The Ex-Hacienda de Chautla isn’t quite what you’d expect to find while exploring the backwaters of rural Mexico. Often referred to simply as “el castillo” 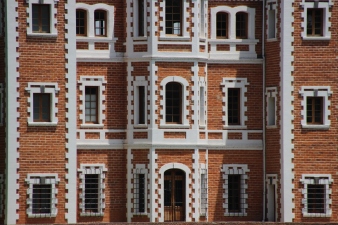 (the castle) by locals, the centrepiece of the ex-hacienda is a distinctively British residency located in the San Martin Texmelucan Valley. Calling it a castle probably isn’t totally accurate; sure, you could say it kinda has parapets, but beyond that its fortifications mostly consist of a wire fence and ticket booth. So its defences might not hold off any Norman invasions; though in all fairness, I left my trebuchet at home.

Siege equipment or no, it’s still an odd sight, and makes for a great way to kill half a day if you happen to be in the area.

On weekends, families from surrounding areas like to visit the castle for a picnic, or a spot of fishing at the nearby lake. It’s all quite low key, and quite rewarding for anyone who needs a breath of fresh air after too much time in Mexico City.

So grab a michelada, kick back near the lake and chill out for the afternoon.

Of course, there’s more to the ex-hacienda than just el castillo. There’s a few short walking trails in the surrounding woodlands, and the afore-mentioned fishing is possible by renting a rod near the castle. It’s also possible to camp near the lake, though don’t expect too much privacy (at least during the day).

Of course, the whole time you’re there, you’re going to be wondering how the hell this slice of British aristocracy ended up in the middle of Mexico.

The answer is actually quite fascinating. In the 19th Century, the hacienda was somehow acquired by a Brit, Thomas Gillow. Later, his son and prominent religious figure Eulogio Gillow inherited the property. It was Eulogio who built el castillo, presumably as a bit of a tip of the hat to his pommy heritage. While at the castle, a local told me it was used at least partly by teachers. I haven’t been able to verify this, though it’s true Eulogio was well known in his era for supporting schools. Despite being sometimes seen as a bit of a man of the people, Eulogio was politically aligned with Mexico’s controversial 19th Century war hero-turned-authoritarian president Porfirio Diaz. During the revolution to overthrow Diaz, Eulogio was stripped of most of his lands by local campesinos. Although the Gillows were eventually able to reclaim part of the hacienda, they later sold their remaining land to Puebla’s state government. That wasn’t the end of el castillo’s story though. Since then, the castle has remained a somewhat well known landmark thanks to its appearance in a handful of telenovelas. Of course, its popularity is limited to locals, and you won’t see many (if any) foreign tourists hitting this place up. So for now, el castillo remains a bit of a curious oddity tucked away off the tourist track.

If you’d like to visit el castillo for yourself, the easiest option is a bus from Puebla’s main bus terminal to the town of San Martin Texmelucan de Labastida. Buses are probably available from Mexico’s TAPU, though I can’t say for sure.

Either way, when you arrive at San Martin, you can take a local bus from a stop almost directly across the road from the bus terminal. Tell the driver you want to visit el castillo, and they should drop you off near a sign for the castle just outside town. From there, it’s a ten minute walk down the road. Entry was MX$40 (around US$2-3) at the time of writing. On the way back, I’d highly recommend stopping at the roadside pulqueria near the bus stop. On Sundays, they have fresh pulque for bargain basement prices. How else would a Norman invader relax after storming a castle?